This lecture was supported by the European Regional Development Fund-Project „Creativity and Adaptability as Conditions of the Success of Europe in an Interrelated World“ (No. CZ.02.1.01/0.0/0.0/16_019/0000734).

Concepts and theories of media originally developed for mass media treat social and linguistic data as „externalities“ to communication conceived as message-passing and channel effects rendered as „impacts“ on how and what media communicate. Clearly, social media expand the public sphere, but how precisely? Recent shifts toward focusing on media practices incorporate additional data about media consumption and media production but do not adequately unite them because they do not go far enough toward grasping (a) how social media are interactive and (b) how – or steps in which – public spheres emerge around as well as through that interaction. This talk addresses three related issues: How to identify more interactive features of social media. What sociologies and language practices capture those features as endogenous properties of communication generally and social media specifically. And how a richer sociology (or thicker description) of social media might render a more stratified view of public sphere(s) that correspond to their variable, often problematic, reality and how they emerge under current conditions of at once globalizing and localizing media? 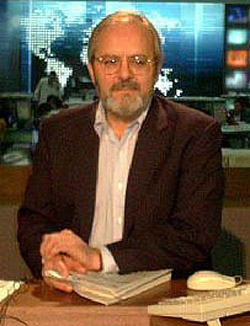 Dr. Anderson has done research on tribalism in Afghanistan, Islamic cosmology in Pakistan, Catholics in the Bible Belt South, and more recently on the information revolution in the Middle East, where he has studied Internet pioneering in Jordan, Egypt, Syria, Saudi Arabia, and Qatar. He has lectured widely — recently at the universities of Westminster and Durham in the UK, Lund in Sweden, Lyon in France, Charles University in the Czech Republic, MIT, Stanford, UCLA, George Washington, and Georgetown, where he was co-director of the Arab Information Project of the Center for Contemporary Arab Studies. His current interests are civil society, cyberculture, and globalization in the Internet age, which are reflected in a keynote address on Blogging, Networked Publics and the Politics of Communication for a symposium of the University of Arizona School of Journalism.

The article deals with the involvement of digital single-lens reflex cameras (DSLRs) with video-capturing capacity in the making of documentary and ethnographic films. More particularly, it examines whether and to what extent these genres were influenced by a trend called the „DSLR revolution,“ which arose mainly between 2008 and 2014. Firstly, it acquaints the reader with the phenomenon of the DSLR revolution from a technological point of view. Secondly, it provides a qualitative analysis of the testimonies of ten documentary and ethnographic filmmakers, who used DSLR cameras in making their films; this is the main contribution of the article. The article evaluates the role of this phenomenon and considers the future involvement of DSLRs in the genre of documentary and in visual-ethnography research.

Autor aktuálně působí jako doktorand na Durham University.
Petr Nuska is a PhD researcher at the Centre for Visual Art and Culture, Durham University. He is particularly
interested in involving the methods of ethnographic filmmaking and participatory video in anthropological and
ethnomusicological research. http://woreshack.cz/